It was my sister’s marriage. There were lights and people and authentic Pahadi musicians killing it like old skool. All the happiness and the amount of work a bride’s brother has to go through and at the back of my head I was planning my remaining leaves day wise for Himachal Pradesh.

My days now were not totally mine, college was over so were the unplanned trips and carefree adventure but adventure and exploring is what keeps me alive and keeps my life on a right track. So, I have promised myself to find ways to respond the call of mountains and this minute and hour wise planning that was going on my head during the wedding was a way to keep my promise to the mountains. 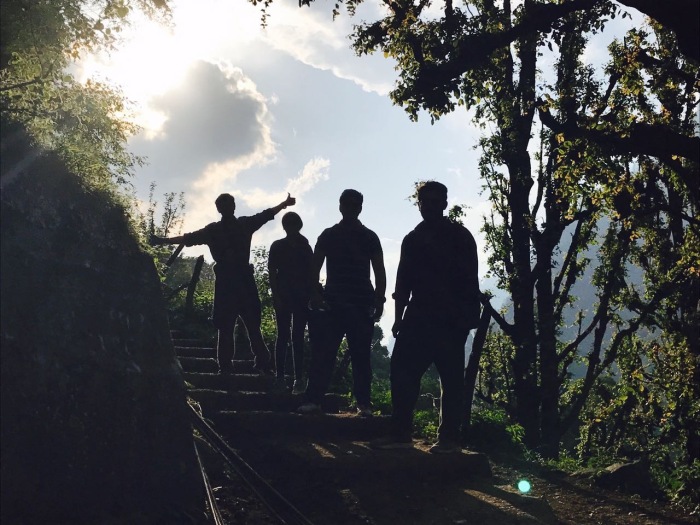 After the wedding ceremony we reached the grooms place in Kumaon in outskirts of Uttarakhand hills I knew the next day I will be heading to the Himalayas, 2 days in a bus was a horrible feeling but a bunch of best of the people were already waiting for me while chilling in Manali. 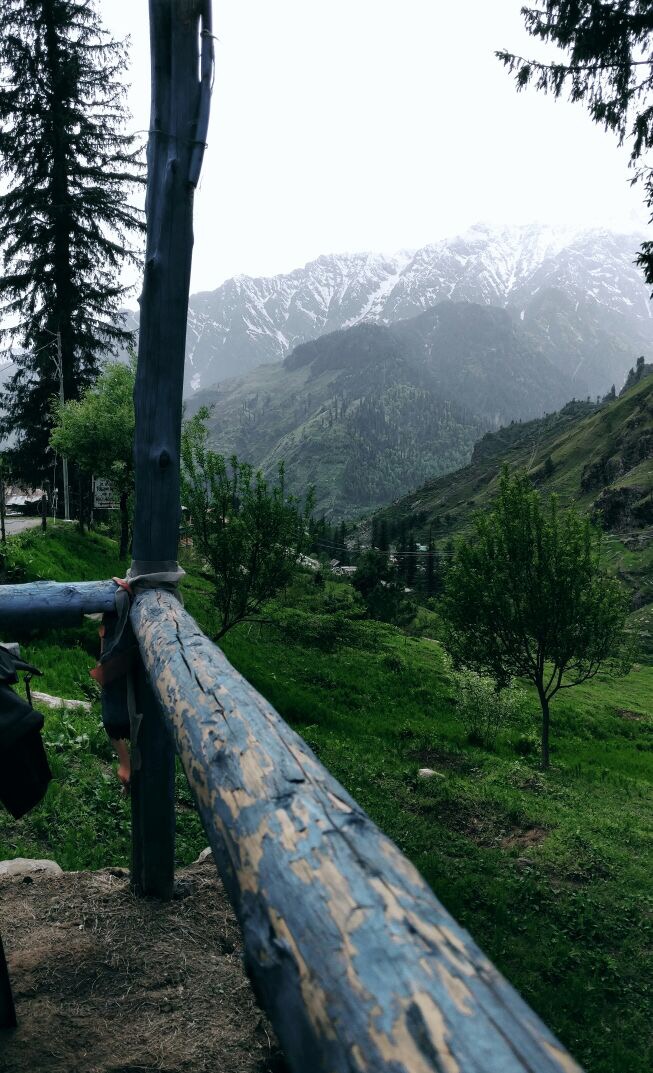 Left my suitcase and my suit, (which I am not a fan of) back at Kumaon and picked my QUECHUA FORCLAZ 50 Trekking backpack and packed some warm fleece and Quick dry Quechua shorts and some drifts and I started the 2 days of bus journey.

As I reached Manali, I went straight to old Manali as we never stayed at the crowded and commercialized Manali mall road. My friends had booked a beautiful hotel beside river Beas and the party had already started. @sudizzm @anameeca999 @anantaa0829 @1nonlysid @netsky_31 and @dishita24 had already started the party as I reached and now we were waiting for our dude @pulkitsharma95.

And arrives Mr. Pulkit and takes the party and the trip to next level. Did I mention that Pulkit is soon to be IAS. We enjoyed the night along with soulful music and beer.

Now the gang was complete and first thing in the morning we hired 4 Royal Enfield 500 for our further exploration. 3 were 500 CC standard and  1 500CC classic for myself because it gave me feeling of my own Classic 350 and it seemed like the most experienced one and I kind of felt the machine. 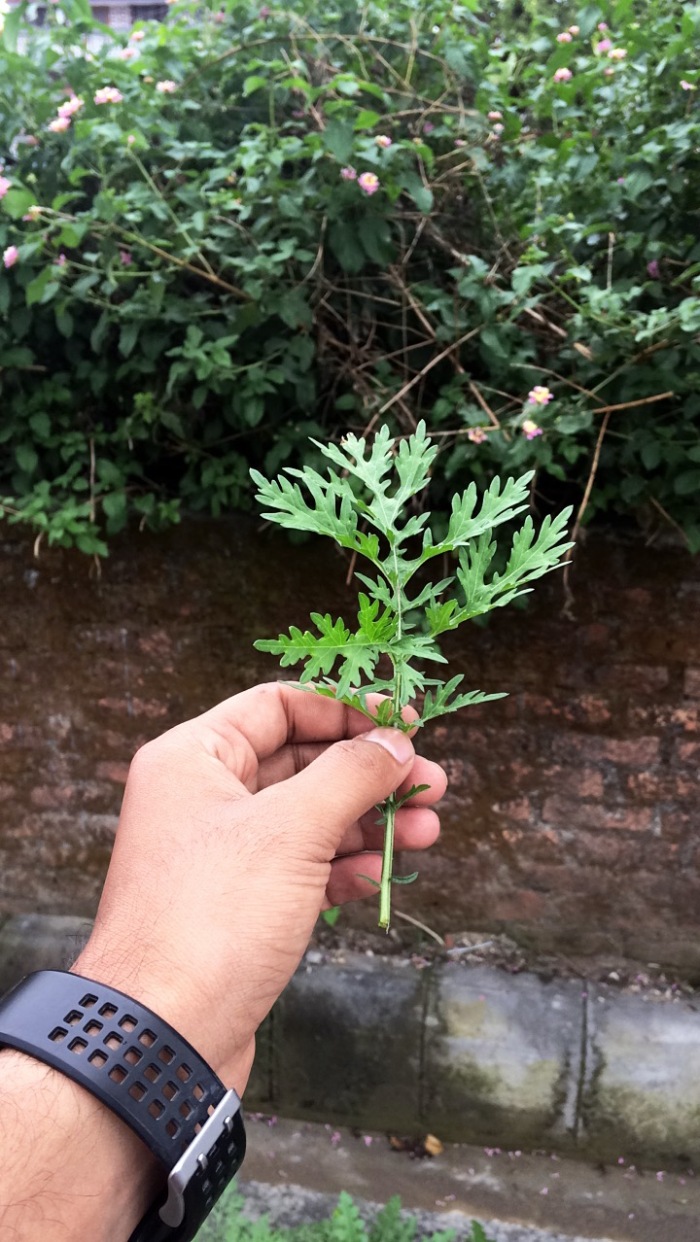 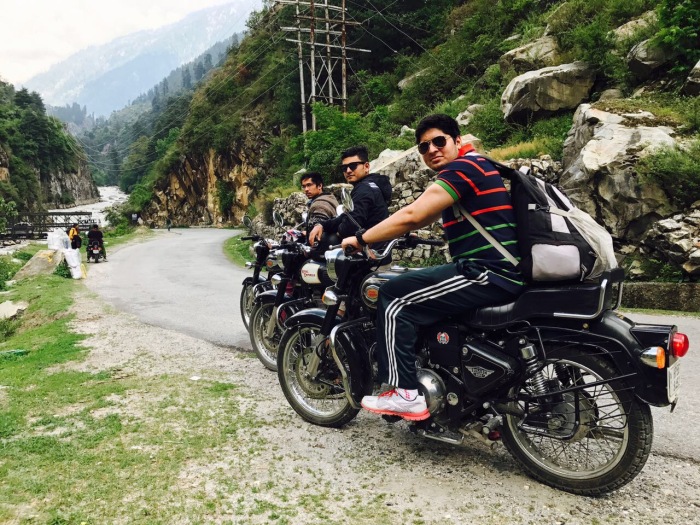 The roads were same, the turns were familiar and the river Beas recognized us and sang us the best river song ever and we rode to explore as our plans changed five minutes before we left old Manali and thanks to Sudarshan (@sudizzm) he thought of a different plan then what we had pre-planned and he is the dude who knows how to make a trip memorable.

Ananta,Anamika,Pulkit,Shubham and Sudarshan were old pals. Siddharth and Dishita , I was meeting them for the first time and this couple was the coolest group couple I would say as they didn’t let us feel that we were with a couple and kept the group as a gang of 8 exploring the Himalayas. 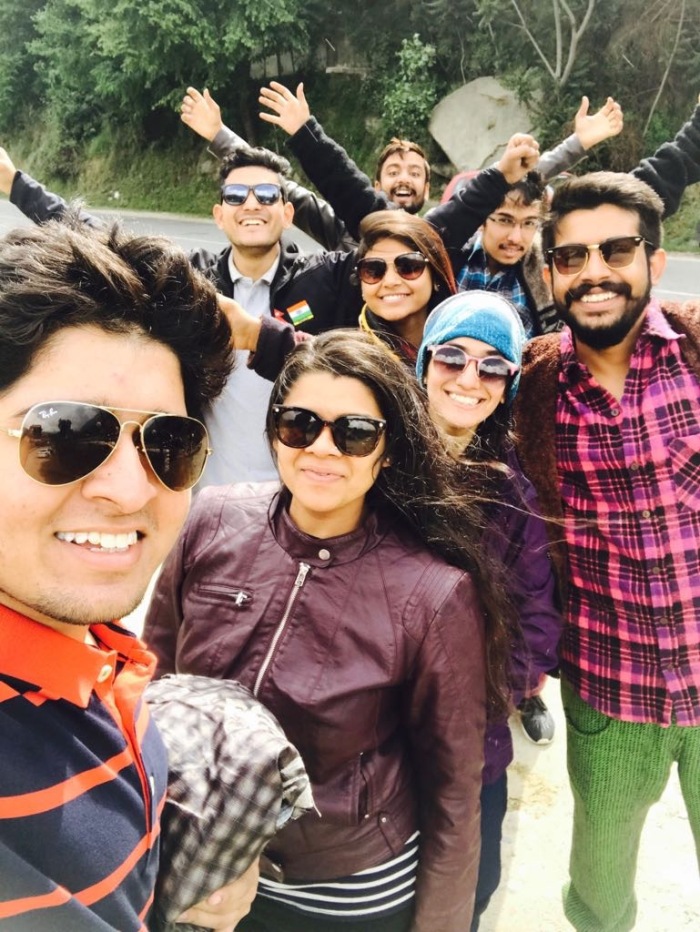 We took a halt at a tea shop and it was more of a herb break  😝 . some tea and maggi and omlete acted as fuel for us to ride further to kasol, where we will be taking a day’s halt and will be continuing the journey further the next day. At the tea shop all of us were soo deep into the vacation feel that the trippy JBL of sudarshan made us dance besides the busy road and my Rajasthani and Gujrati friends were throwing some bhangra moves in song Patola by BOHEMIA and several other Punjabi songs and there was time for kygo house music and mtv unplugged songs as well during the break. 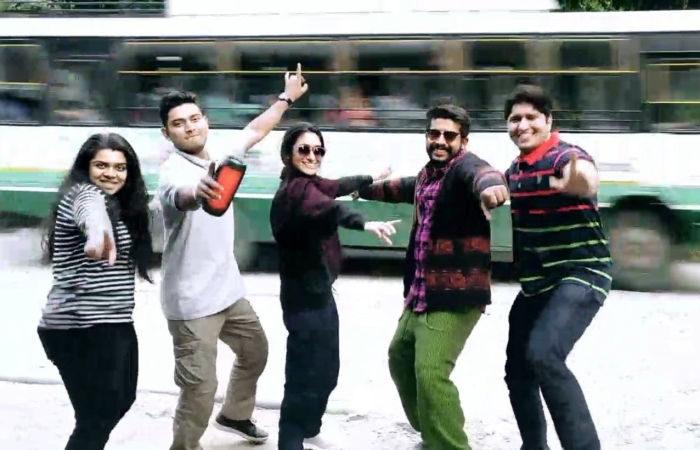 It was just 3-5 km from kasol and my pillion rider Ananta screamed chaaaaaaaaaaaat and we stopped for some fruit chat followed by our rest of the team. More than the fruit chat stall the aura and the beautiful road surrounded with pine trees made us stop and listen to the aggressively flowing Beas river in Parvati valley. 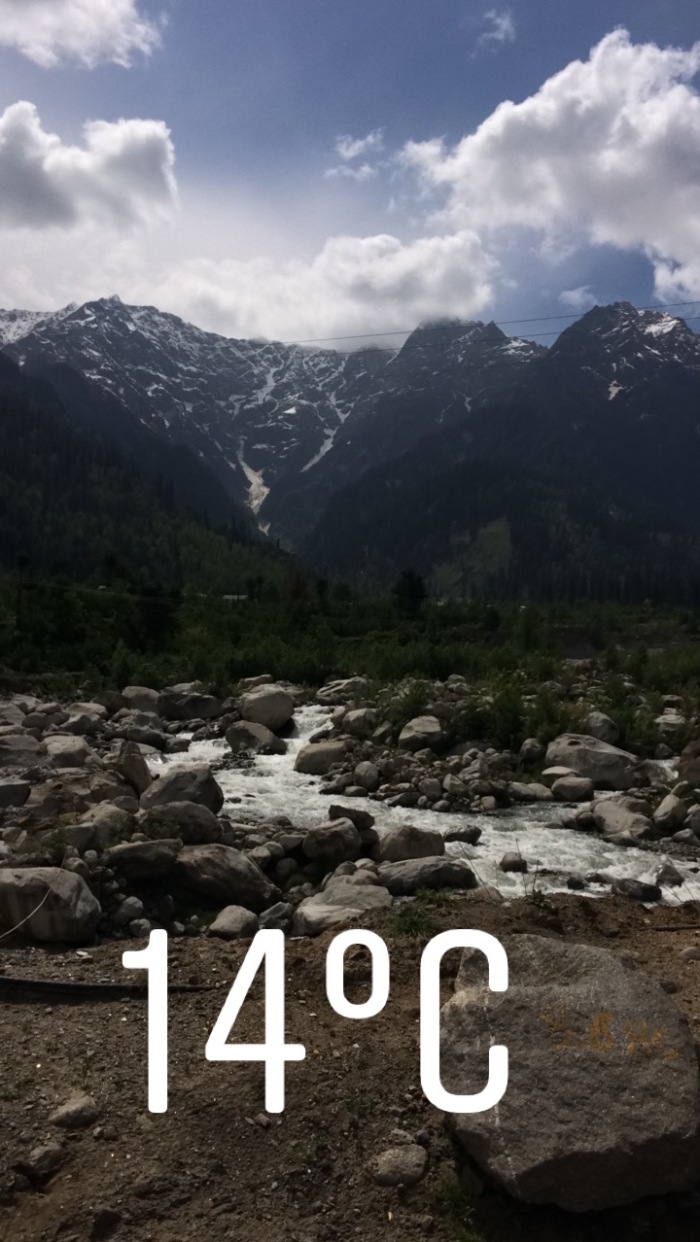 Sudarshan had a homestay already fixed in outer kasol maybe fascinated from his last visits. And when we reached the place it was a lovely homestay with greenery and a wide open garden at the end of which were parked two caravans (RVs) and it was a lovely feeling to be surrounded by travelers and greenery that the homestay provided and the Himalayan dogs that the owner has were almost similar to wolves but cute. 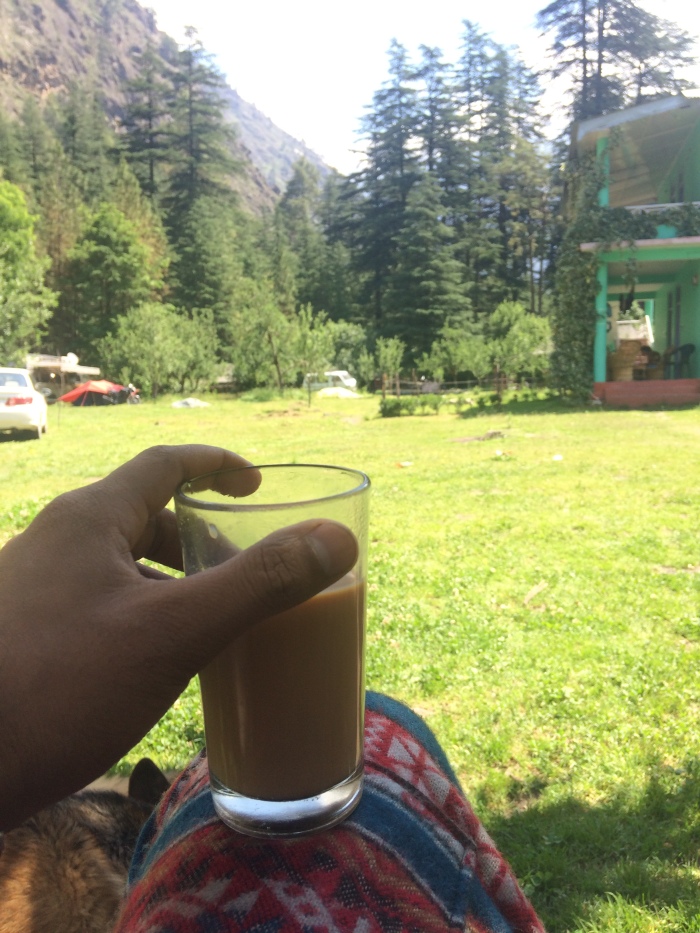 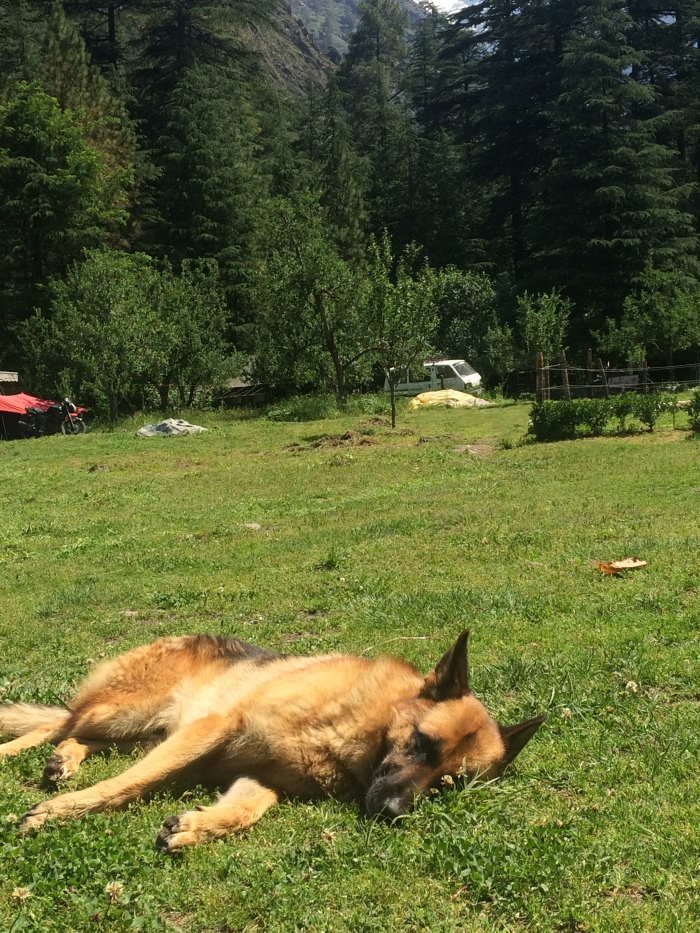 The night included dinner at our favorite place EVERGREEN CAFÉ Followed by the late night chit chat at our rooftop veranda and some beer and some crazy dance moves. 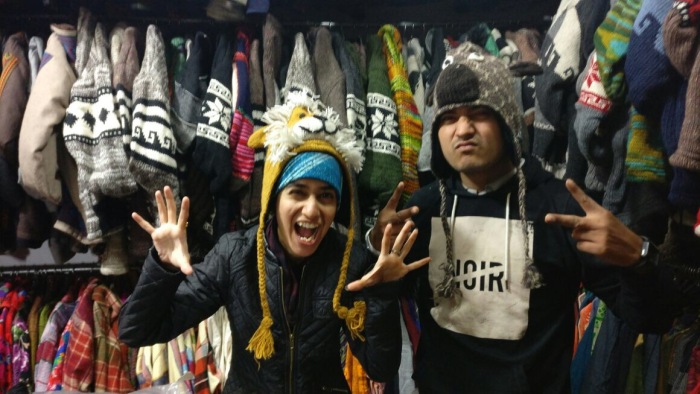 Next morning included included breakfast at our 2nd favorite café in kasol i.e. MOON DANCE CAFÉ and now we headed for the unknown. And it was the best of the feelings. We rode till Barshaini and Ananta and me took a worng route up to some village and realized we were in a wrong route after it was too late and 3 of our motorcycles in the correct route and we headed somewhere we were not sure of destination and the bumpy Himalayan roads were so beautiful that we didn’t bother look behind for our gang kept on riding and the time came when we realized that we were the only two souls riding the route and we were a group of 8. 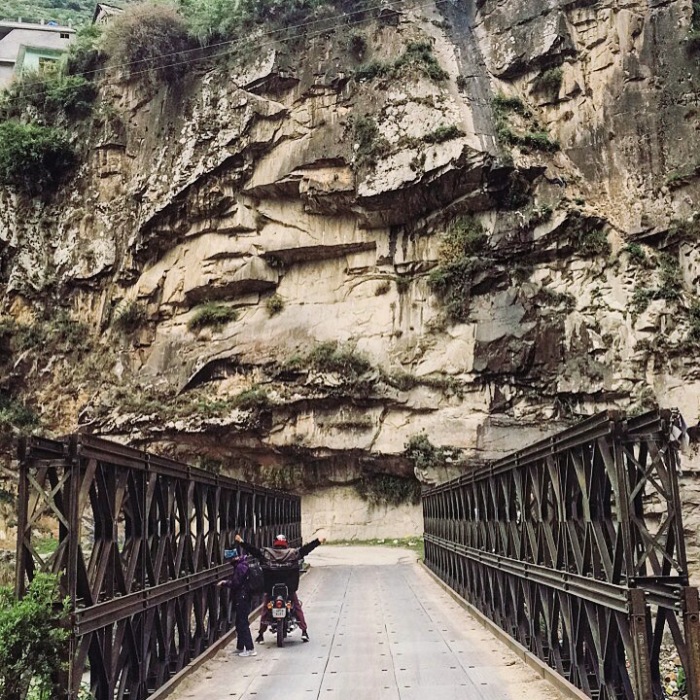 After we realized that our team does not seem to follow us I called Sudarshan who knew where we headed to, thanks to the still available network connectivity the team could be on the same page and was back to ride together towards the destination.

After riding few kilometers after the reunion we reached a point where we had to park our motorcycles in front of a tea shop and we now  headed for PULGA .

A small 1 hour walk and we reached Pulga , it takes less than an hour as we were hunting homestays that took us an hour.

We settled in Royal Pulga guest house and booked 3 rooms whose rear doors opened to beautiful wheat field. The moment I opened the rear door, the soft breeze creasing the bundle of wheat softly ran through my cheek and the view had a beautiful homestay, which was built like an old skool Himalayan mansion with big wooden windows and white walls and stone plates used in the roof, Where we were denied for the stay because the homestay was full of Israeli travelers and they were not comfortable to share the homestay with anyone else except their group. This was not the exact denial message given by the manager but It was written all over the aura when we went begging.

The never ending jungle (Ferry Forest) behind our homestay was a gods true creation of love and serenity. The balcony  of the homestay in first floor was open to sit and throw the legs and enjoy the sunset. 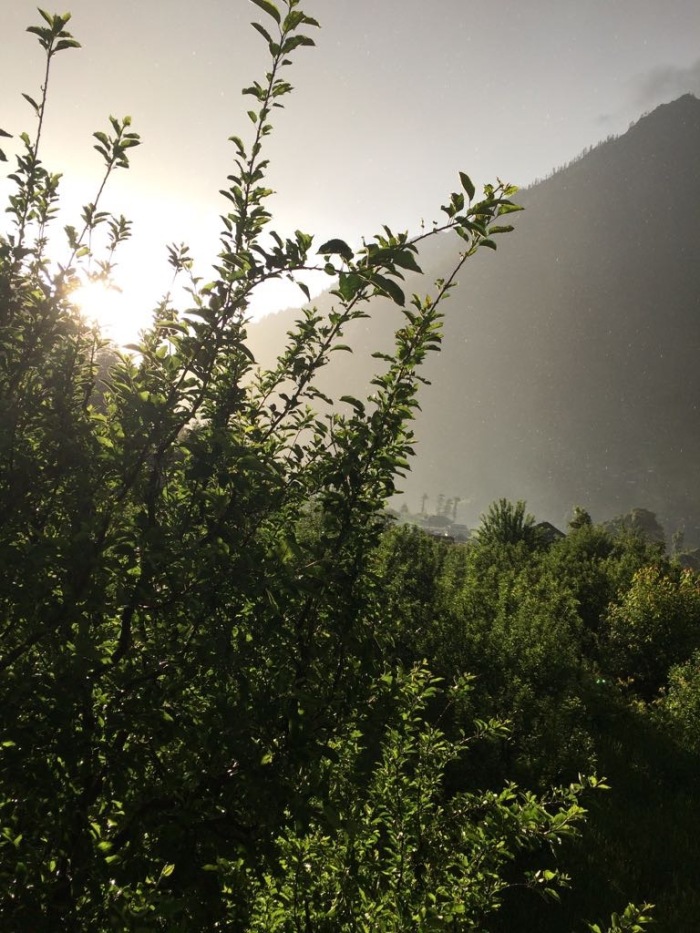 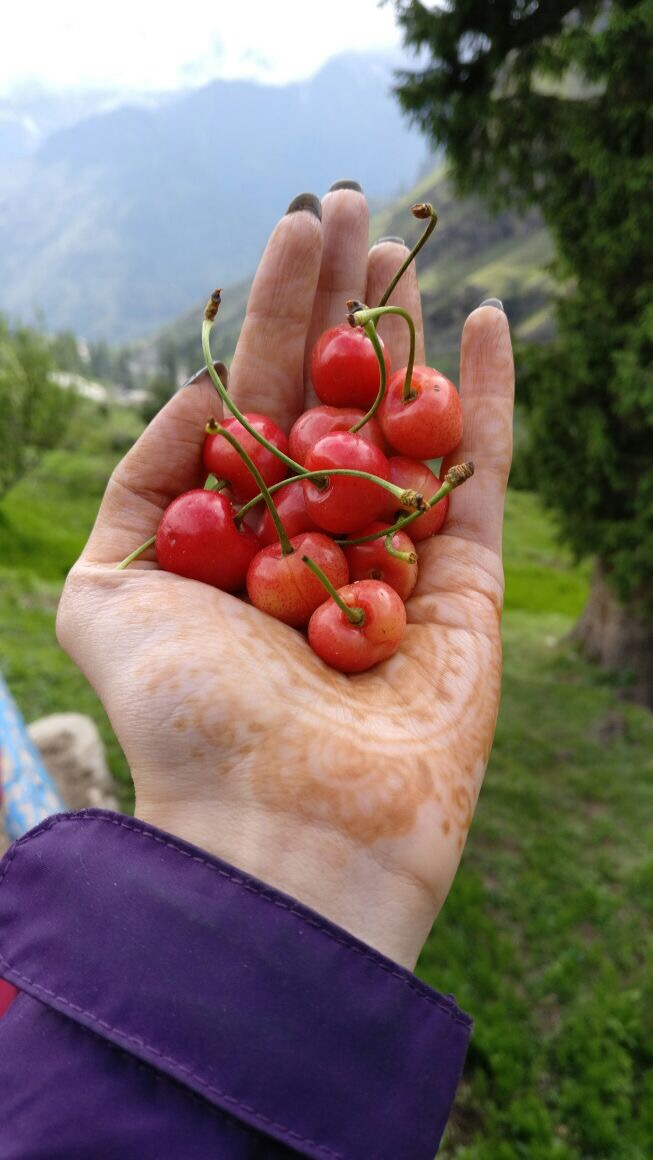 The Apple trees would touch your feet in first floor and the orange red sky during sunset and the smoke coming out of chimneys from the houses in view was like animation and the peace there was a blessing, A blessing which would active all our senses and I could literally feel my breaths and the heart played its own melody jamming with the view of snowcapped mountains and the chirruping of birds and the peaceful Himalayan lifestyle. 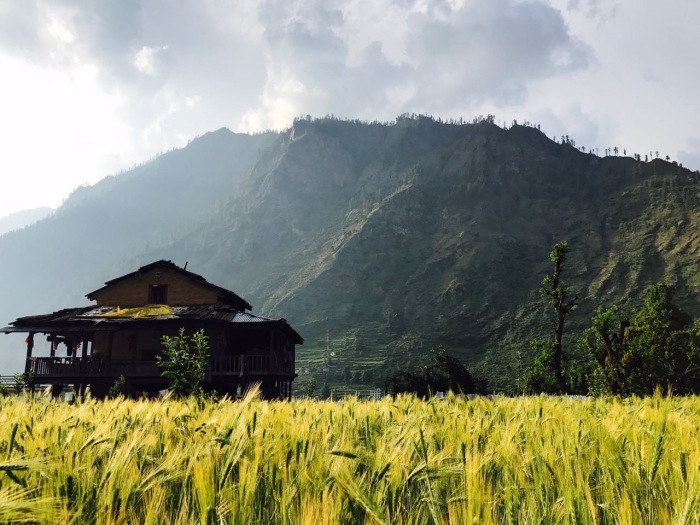 When we walked the cross roads between the wheat fields and apple orchids we could observe the day to day peaceful and simple Himalayan life and that is why this trip would be in my list of best times. People working in the small fields, kids walking and grazing their cattle in the forest, the aged, working on their little farms beside their houses and the women collecting veggies for the evening was the observations of our short walk around the village. Their lives seem so sorted and simple. No one seem to be running after something, no greed and there was friendship and brotherhood among people I suppose it’s the Himalayan carefree air that they breathe. 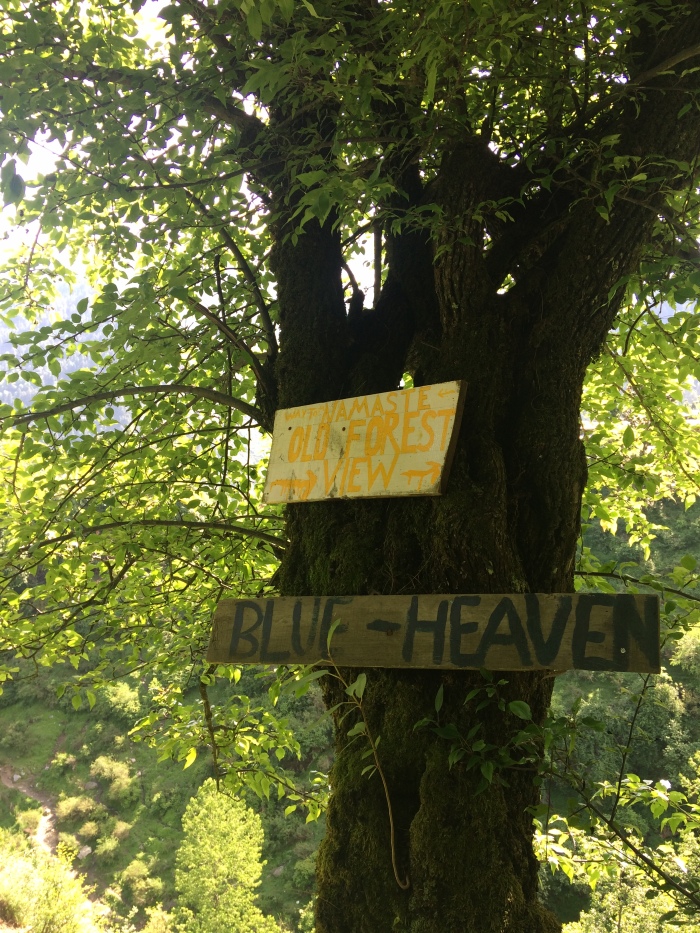 Listening to soft music and enjoying the serenity we didn’t realize it was already dark and the dinner was served, the chicken we had asked for during the day (they had to go to market i.e. 30 mins of hike to get chicken that is why we had to ask for it during the day) arrived and they made some amazing cheese olive pizza, the thin crunchy pizza base still make me want to go there even if it’s just for the pizza. Chit chat followed by the dinner was some quality time spent as we shared stories of faraway places and good times. We came from 42 degree Celsius and here we wrapped ourselves in blankets and signed out for the day.

Early morning Siddharth came running with some amazing photos he clicked and with some mesmerizing slow motion videos of clouds running over the Himalayas. WOW faced we ran to the terrace and the astonishing view of sunbathed Himalayas got us just like every single time we ran to mountains. 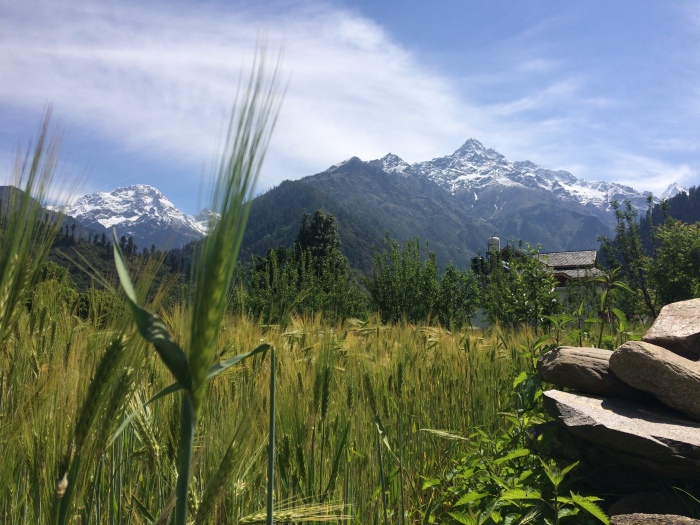 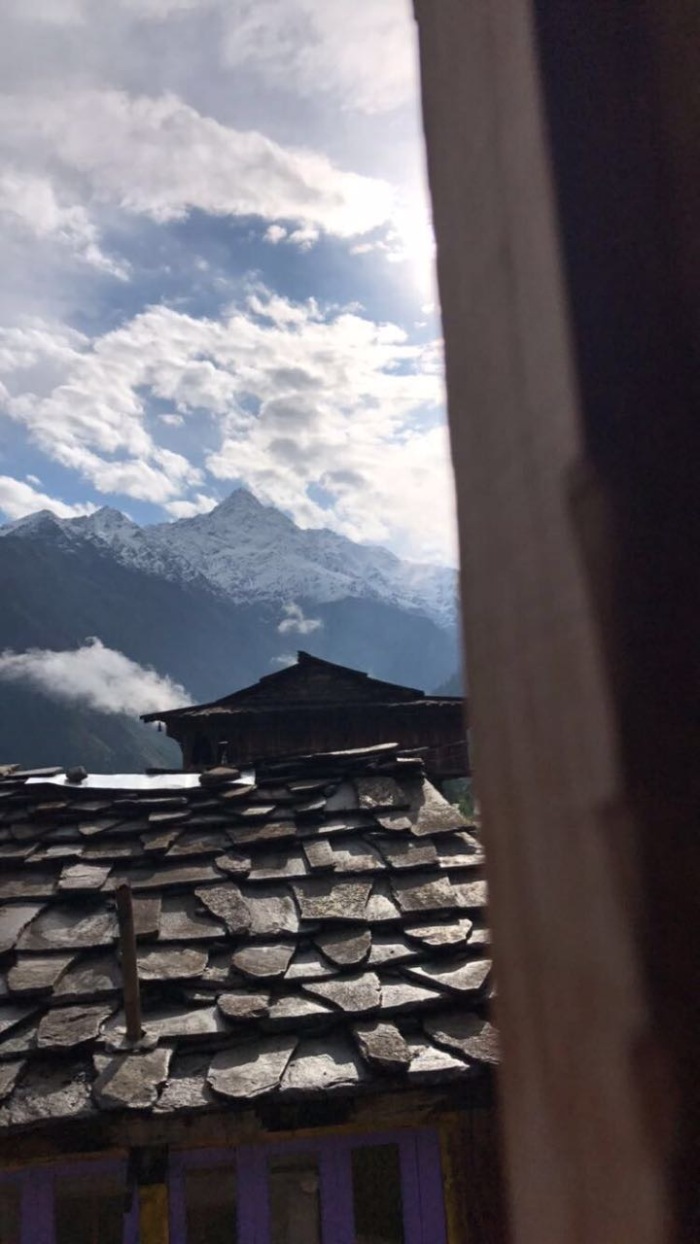 No one was willing to leave the view and the soothing morning sun and we ordered breakfast on the terrace and we sat in a circle and had the finest breakfast of a long time.

Now it was time to go into the woods, the stories we heard of ferry forest and its beauty were all true. Although we had ferry forest in the view from our rooms but the real beauty we saw when we actually walked into it and walked deep in the woods.

Silence and peace jamming `with soft breeze `as the warm sunrays fought the leaves of mighty big trees and kissed the ground, the birds flew in all dimensions, in and out of sight. The aura had a magical pull that kept my feet frozen and I was experiencing the most beautiful things in life and I wouldn’t trade a second of it for even the whole world and miss a fraction of it. There was love and passion, the love that gave life meaning, The love for mountains and extraordinary experiences. 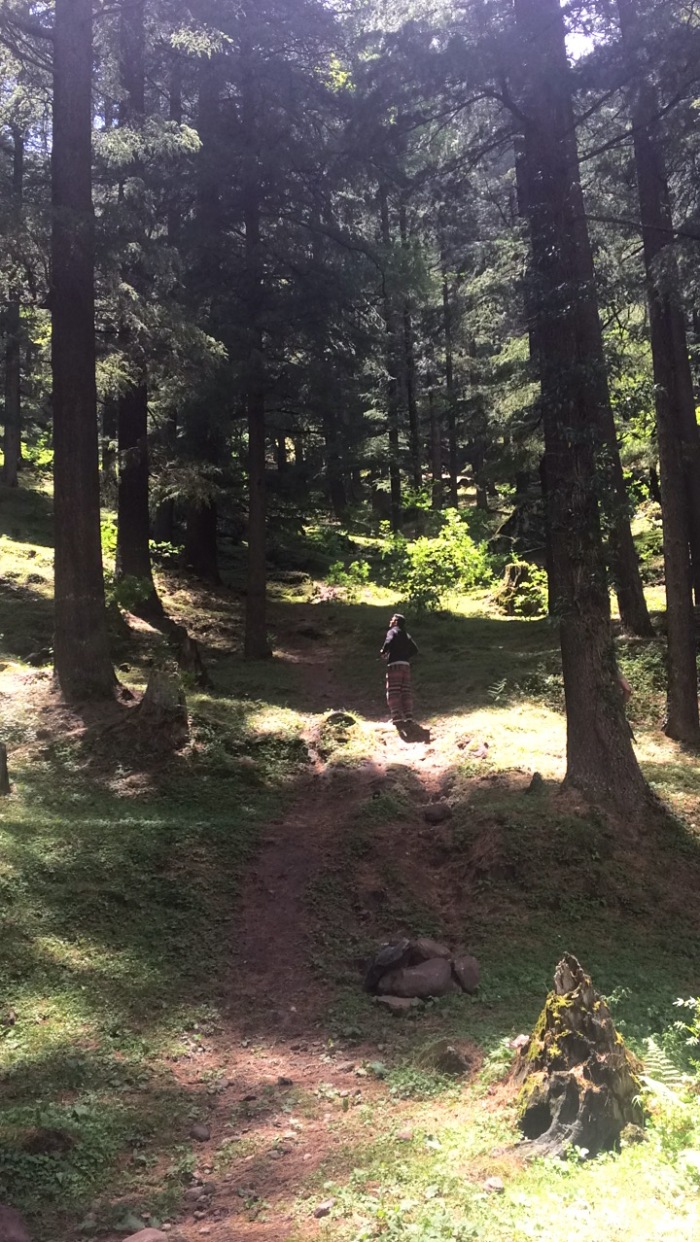 The warm sun made us throw our T-shirts and let the rays wash the materialist away from our soul. We sat for hours in the woods just listening music and hopping from one place to another.

As the hours past we were close to leave this beautiful piece of dream land which awaken our senses blurred with our day to day hectic lifestyle. 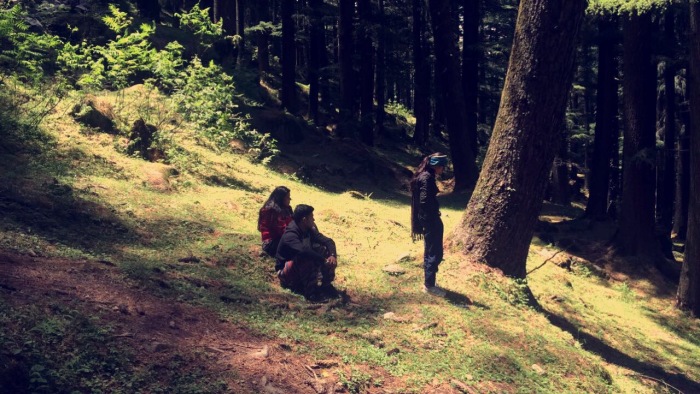 Next morning we packed our bags and headed back to barshaini where we parked our motorcycles and started our ride back to Manali. The ride back to Manali was via same route but the feeling was not the same the road back home we rode with heavy hearts.

All the fun and craziness and the unforgettable experiences and the familiar roads of the Himalayas through the beautiful Parvati valley made me realize that DESTINATON WAS NEVER A GOAL, BUT TO KEEP MOVING WAS. We keep every mountain we climb clean and do our part. DO YOU?

2 thoughts on “PULGA, The Gang Into Wilderness” 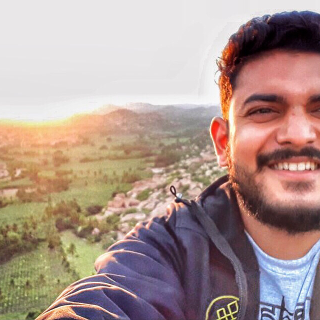